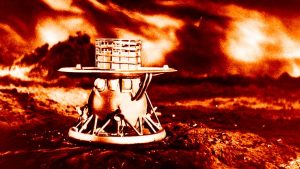 Can EVPs be present in spaceflight audio where no human being could possibly every have gone? It’s a valid question I am investigating.

I decided to test the theory by looking for audio tracks from space probes where no human beings could possibly have been present to contaminate the audio track.

I did test some in-flight audio from the Perseverance flight as it was inbound to Mars. Other than some noises aboard the craft in flight, it really was devoid of any interesting anomalies. I sort of expected that when I ran the analysis.

The original audio on Youtube is shown below. I simply extracted the audio, ran an analysis and did pick up one unusual “voice” in the audio at 3 minutes, 46 seconds into the clip.

The audio clip of the extracted “EVP” is below:

It is recommended to wear headphones to hear this audio.

Is this an other-worldly EVP? It likely is not. It seems to be a voice saying something like “I like this” underneath the noise from the Venusian wind. This is a VERY difficult bit of audio so use the headphones and turn up the sound. I recommend putting this on looped play. You can download the clip by clicking “Save As” while highlighting the player and then use your own software to loop the clip.

It is possible that the audio mixer that did this somehow bled through a little audio at an opportune time and thus the track is contaminated. Besides that, how would any paranormal entity interfere with this UNLESS… at the time of the extraction and recording to the YouTube video itself  the entity commented on the video itself here on Earth? It’s a likely possibility. I did an entire show on EVPs on YouTube recently and shared many clips of EVPs caught on YouTube streams.

Of course, we have to consider the off-chance that there may be an ability for Spirits to visit other places other than Earth.

If it isn’t Spirits from Earth then would it make sense for a spirit entity on Venus to even comment in OUR language? Could it be that we might fail to recognize a possible communication attempt from someone or something on another planet? EVPs happen here on Earth and it is distinctly possible they could be recorded on other worlds. We need to remain open to these possibilities and keep listening to the audio coming in to insure we catch something that most people miss on a first listen to a audio or video clip on social media.

This goes pretty quickly from being talk of EVP to a discussion about extraterrestrial communication. I think it pays for EVP researchers to listen to these audio tracks and test to see if anything does come through. We have the trained ears to hear this stuff and tease it out if something is there to hear after all.

What do you all think? Comments welcome on the SoulStreamRadio page on Facebook.