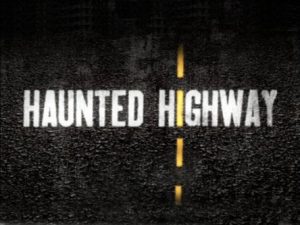 They say everyone has their 15 minutes of fame. I certainly didn’t go looking for mine. It just… happened.

It all started with a cell phone ringing. I answered my phone and my friend Sharon was on the other end with some surprising news.

She said she had a producer looking for good EVPs and she told him that she thought I’d be a good fit for a new show that SyFy was working on called “Haunted Highway”.

It took some convincing on her part to make me believe this was on the up and up. I went ahead and called the producer, a friendly guy by the name of Patrick Powell.  Thus began the first of many calls that ultimately saw me eventually heading out to film my several minutes long appearance on Haunted Highway which was broadcast on national television on the evening of July 31, 2012.

To say it was a nerve-wracking thing be on national television would be an understatement. I was entirely used to being behind a microphone and doing radio work, but this was next-level and not at all what I was used to.

I had earlier submitted to Patrick Powell an EVP by email that I had captured on December 27, 2008 at the Pioneer Cemetery in Coloma, California. I figured I’d be given a soft letdown and they’d move on, but instead, after all the phone calls and a brief lunch with Patrick in Placerville, I found myself sitting in a restaurant in downtown Placerville in May 2012 being filmed for my appearance on the show. 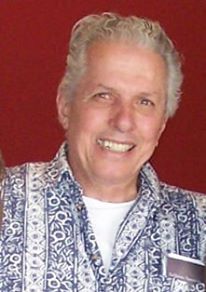 Dad in 2006 before he became ill. His passing in 2012 occurred just prior to the Haunted Highway show events that came into my life.

To top it off, I had just come off my father’s passing after five VERY long years of his stroke and seizures ruling our lives. I was definitely not prepared for all the attention. I was just someone who captured an amazing EVP and now this was happening.

It turned out the show personnel and hosts were very nice and did a fine job of calming my nerves but I must admit I was NOT in my element and was still nervous. Still, it went fine and the episode was very well received. Hosts Jael De Pardo and Devin Marble were a lot of fun to work with and they are true professionals.

I was a bit concerned how my workplace would react but not a word was spoken. Given that I was webmaster for a large aerospace company, it did cross my mind that it might be an issue but overall, they either ignored it or didn’t care. I do recall my boss being a little defensive anytime my paranormal work was brought up but otherwise, life went on as before.

I did get some interesting email and a few snide comments on social media. For the most part it was positive and fun. On the flip-side though, I was still dealing with my father’s passing and had basically hung up the Paranormal cape for awhile while I dealt with things.

Honestly, the SyFy event was not the big event of my year, but I do regard it as a positive thing and was perhaps a little push from my Dad to get back out there. It’s taken awhile to embrace it, but I have come to terms with his passing and realizing it is a good thing to get back to life and chasing what interests me.

I hope to see SyFy bring back programs like Haunted Highway… They were a great show with great people and I totally enjoyed the entire experience.

The EVP that started it all

One of my many EVP recordings from my paranormal work made it such that I was on the SyFy show “Haunted Highway” to debut my EVP recording of a little boy whose voice called out as to where his grave stone stood at the “Pioneer Cemetery” in the gold rush city of Coloma, California. There were several people in our small group who went out on December 27th, 2008 to do some EVP field work at that cemetery. It was broad daylight and we were the only people on the grounds. There were NO children anywhere near the cemetery. It was four adults, myself included.

As we walked towards a certain point in the cemetery, one of the people mentioned the story of the little boy and I had my recorder on for the entire time. I actually caught more than one EVP in this series, but we are focusing only on this one class-A EVP that was so compelling.

I have a very extensive collection of EVPs I’ve captured over the years and I would rate this one in the top ten I’ve ever recorded in my career of chasing the voices of the dead.

EVP recording that gave my my 15 minutes of fame. A little boy is heard calling out to us as we investigated the Pioneer Graveyard in Coloma. “Mama gave me a little one” is how he starts off his interaction with us. None of us heard the voice as we were recording our walk through the cemetery in late December of 2008.

All in all, it was a positive experience, but I was NOT prepared for the attention it all brought. I’ve gotten a little more used to media as time has gone on. I see it as “interesting” but not the end-all be-all of the work I do. I’m just a guy who is interested in unusual things and think this universe is a lot of fun to investigate.

The Haunted Highway investigation at Pioneer Cemetery ended with a film crew spending the night at the location where I captured the initial EVP four years earlier. I only became aware of this clip from the episode being on YouTube and thus include it here for your enjoyment.

I hope you enjoy this little peek into this little episode of my paranormal career. Who knows? Maybe another of my EVPs or paranormal cases will get noticed but for now, I’m just happy to have met the fine folks at Haunted Highway and give thanks to them and producer Patrick Powell.

So, it’s back to radio, having fun and just enjoying the strange world we live in!

My full appearance on Haunted Highway can be see either on YouTube or Amazon. The episode is a purchase-only appearance. I have included the YouTube link here but realize this is a purchase to watch video.

Here is a season two teaser for the show